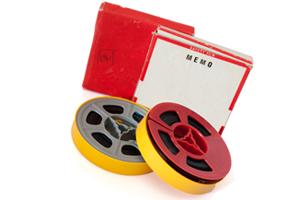 Cine films tended to be an expensive hobby for amateurs due to the cost of purchasing and processing of the film, but as the cost of the equipment lowered, many families captured many treasured events such as birthdays, weddings, parties etc.

During the 1970's , manufacturers introduced VHS and Betamax handheld camcorders which resulted in cine films becoming obsolete. Most Cine films still in existence are at least 40 years old.

Our Cine film digital conversion service is different to our normal service, due to the speciality equipment required. We DO NOT project the film onto a wall and record it, which some companies in the past have done. The film is passed through a specialist machine and each frame is converted into a digital image. Quite often the film has to be fed by hand and it is far more labour intensive than camcorder or VHS tapes, and the price depends on the format of tape, whether audio is included, and the length of the tape. Because of this, we cannot give a quotation online, please contact us to discuss options.