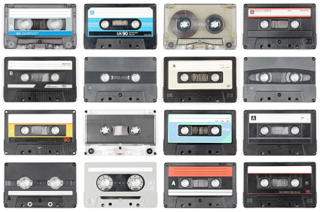 Each side of the tape is converted individually and returned as it's own mp3 file, ready to load onto your mobile phone, smart TV or smart speaker system, such as Sonos.


The compact cassette (commonly known as the cassette tape) was introduced in 1963 and eventually replaced 8 track cartridges and reel-to-reel recordings for consumers, and soon become one of the most common formats for prerecorded music, especially for in-car dashboards.

Many people also used the ability to record onto the tapes to create an archive of conversations or performances of family members that are now precious but rarely listened to.

The introduction of compact discs (CD's) started the decline of the popularity of the audio cassette boom, however many people invested time and money into audio cassettes and are now no longer able to listen to their recordings.

MP3MP3 is the most common format for digital audio and is used to play music across a number of devices such as mobile phones, smart TV's and smart speakers. The files can be compressed, which typically means that to make the file size lower, parts of the audio are removed that are normally our of the human hearing range, but even so some 'audiophiles' prefer other formats that do not compress the files, which are called lossless, these files typically take up much larger space than mp3 files.

WAVWAV standard for waveform audio file format, and is an alternative to mp3 files. The main difference between mp3 and wav is the file size, wav files typically are not compressed and therefore capture the sound closer to the original, however the trade off is a much higher file size, e.g. a 6 minute audio section could be 10MB for an MP3 but 100MB for WAV files.

Pixave are happy to convert your audio cassette into your choice of format (mp3/ audio cd / wav) at no extra cost. By default your tape will be scanned into mp3 files, if you have different requirements please let us know in the special instructions of our order page or when you speak to us on the phone.

Find out how much it will cost to convert your cassette tapes to digital. We charge a flat rate per tape, regardless on the format of audio file you require. We are happy to produce either mp3 or wav format at no extra cost.

You can of course contact us or use our online system to get a quote and place an order, then just send your cassette's to us. We will take great care of your tapes.

Why convert your audio cassette's ?

Want to share your old audio cassettes with your children ?