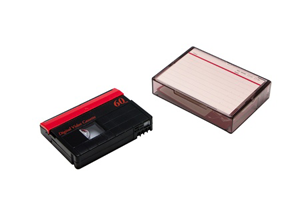 Let Pixave convert your old camcorder tapes into digital format, e.g. DVD or mp4, so you can watch them at any time without having to worry about storing tapes or degrading.

Using our MP4 service, you can upload your precious memories to the cloud, such as Google Drive, Dropbox or other services from companies such as Amazon, and then play them on your Smart TV or phone.

We can process most types of tapes from old video cameras, including VHS-C, Hi8, Video 8 & Digital 8.

VHS-C is a form of camcorder tape, which is essentially a traditional VHS tape that with the aid of an adapter could be played in any VHS player.

Video8   is a 8mm video tape that was originally developed by Eastman Kodak in the early eighties but was made popular by the Sony Handycam a few years later. The technology is very similar to Betamax, and was higher quality than VHS, and was much smaller than its competitor, VHS-C.

hi8 is a successor to Video 8, it is an 8mm tape but with a much higher resolution than Video 8 and therefore could store a higher quality image than either Video 8 or VHS-C. Although the video was still stored in analog format, some cameras could also record the audio in digital PCM format.

Digital8 was introduced in 1999 and stored a digital image (using a DV codec) on standard 8mm tape. The data stored on the tape is identical to Mini DV, however Mini DV had an advantage of being on smaller tape. Sony held the license to Digital8 and would not allow other companies a license to use on their video cameras and so MiniDV became the market leader. Digital 8 video is usually transferred to a PC/MAC using a Firewire video cable in digital format.

Mini DV    contains digital video and audio in an identical format to Digital 8 but on smaller tapes. As Sony held the license to Digital 8, there were many more Mini DV cameras compared to Digital 8 cameras, even though the quality of the video was identical. Mini DV video is usually transferred to a PC/MAC using a Firewire video cable in digital format.

We'll convert any camcorder cassette into a DVD, fully authored with a professional looking DVD menu for &pound15.

Why convert your tape's ?

Why convert your tapes?