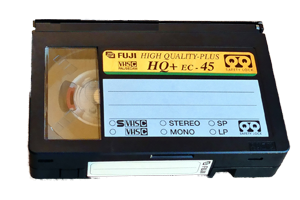 We offer a full conversion service for your old VHS-C video camera tapes. We can convert your tapes into a modern digital format, such as MP4 for smart TV's, tablets, phones or cloud services such as YouTube, Google Drive and Amazon.

VHS-C cassettes were introduced in 1982 and became popular with consumers as they could be loaded into video cameras to record home movies. The tape inside a VHS-C is identical to traditional VHS tapes and can be played on any VHS player using an adapter.

VHS-C was popular for many years from the early eighties but eventually technology such as Hi8 cassettes with its higher quality and resolution became more popular, so the tapes that are still in existence today may well be over 30 years old and starting to degrade.

Converting your old VHS-C tapes to a modern format will ensure that your memories can be archived without further degredation.

If your VHS-C camera was purchased in America or Canada, there is a good chance your tapes have been recorded in a format called NTSC which is not compatible with UK TV's which use the PAL format, Pixave can convert your NTSC tapes into a PAL DVD or MP4 file, ensuring you can watch your american tapes on UK TV's.

PAL is a television broadcast standard used in the UK, it consists of 576 lines with 25 frames displayed per second. PAL was adopted by mostly european countries, though some countries such as France, adopted a slightly different version called SECAM.

NTSC is a television standard used the USA & Canada, it consists of 486 lines with 29.97 frames displayed per second. As the USA became popular for UK tourists, many consumers purchased NTSC camcorders or VHS tapes and could not play them in the UK. Manufacturers tweaked their players so that NTSC video tapes could be played on PAL TV's, but these were usually in poor quality.

DVD is an optical disk format, developed by Sony, Philips, Toshiba and Panasonic in the 90's. DVD's typically hold 4.7GB of data, approximately 2 hours of video. There are however, dual-layer DVD's that hold twice this amount, allowing upto 4 hours on a single disk. DVD's require most movies to be compressed in order to fit onto a disc, e.g. a 2 hour uncompressed movie could easily take up 40GB of data, and the only way to compress the movie down (and keep it the same length!) is to compress the movie, which in reality means that parts of every frame will need to be deleted. This sounds scary, however it's not as bad as it seems, if you imagine a scene such as a local football match, the difference between one frame and the next will be tiny, e.g. the sky and clouds will be the same, and so in theory all you need to record is the first frame, and then the differences from one frame to the next. This means that your choice of software you use to perform the compression is crucial and will make a dramatic difference to your final DVD quality. Pixave use iDVD, provided by Apple, on best quality settings, which produces videos of outstanding quality.

MP4 is a digital video file that contains both video and audio. These files can be uploaded to cloud services such as Youtube and shared like any normal file. PC's and MAC's are normally bundled with software to play MP4 files, as are smart TV's, mobile phones and tablets.

Pixave are happy to provide you with the uncompressed digital movie file if required, it will however by very large, please contact us to discuss.

We'll convert any VHS-C cassette into a DVD, fully authored with a professional looking DVD menu for &pound15.

Why convert your VHS-C tape's ?

Why convert your videos?